So today was our last day and we headed to a new site to help out a tornado victim that was trying to rebuild his house but unfortunately was in the hospital due to appendicitis.  We needed to put some plywood on the floor panels so the family could more easily access the bedrooms and bathrooms in the back of the house. 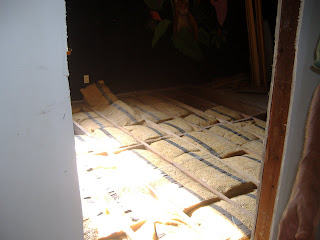 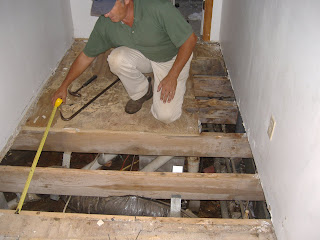 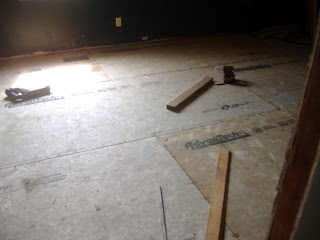 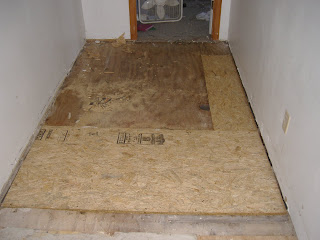 After we finished the job we headed back to the church, got showered up, ate lunch, then hit the road.  We were so fortunate this week to have a great place to stay (thanks St. Philips!) with great hospitality, food already prepared for us, a place to take warm showers, and most importantly, fellowship with others.  It's so easy to look up and want the "better" things in life, and so few times do we ever look down and see just how lucky and blessed we are.  Thanks everyone for your support and prayers, it means more to us than you know!!
"The best things in life aren't things at all".
All the best,
Megan ﻿
Posted by Foothills Convocation Tornado Relief at 8:31 PM No comments:

Day Four: Someone was listening to our prayers!

We FINALLY got a break from the heat today.  We woke up to a cloudy, wet day due to a late night thunderstorm last night.  The temperature was in the 70s all morning, which made for a much more pleasant work day! We were sent to an elderly couple up the road from the house we were at yesterday, and needed to put a roof over their well house. 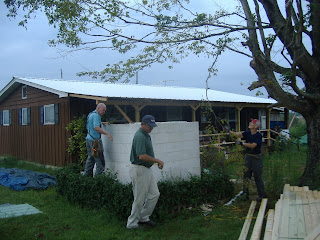 We got busy cutting wood, hammering, and putting the covering on and before we knew it, we had finished! 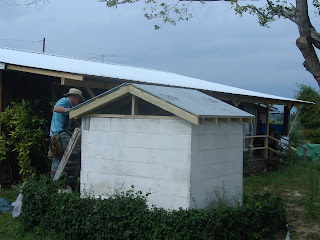 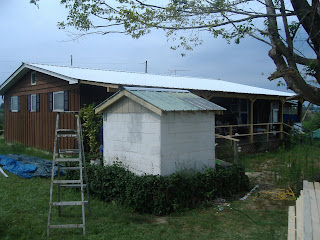 The weather definitely helped with our speed today!  The rain held off just enough for us to finish the well house and started to pour as we were about to get started on the other roof.  We decided to call it quits and went to lunch at a local restaurant in Rainsville where we were treated by the owners (parishioners of St. Philip's) to some great food (can we say fried chicken, mashed potatoes and gravy, cheese biscuits and peach cobbler? mmm).

And alas, tomorrow is our last day, but we've been so blessed to meet so many wonderful people and help out.  Thanks everyone for your continuing prayers!!

Whew, it sure is hot in Alabama!!  Here's a shot of Ken's thermometer in his truck.  Trust us, it felt way hotter. 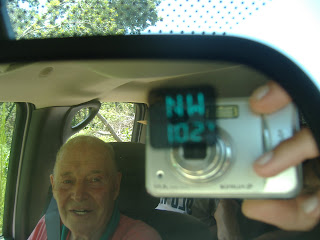 Besides staying hydrated, we had a pretty interesting day!  We met up again with our local contact, Woody, and he sent us to a new location to help put a roof on a new storage shed.  We weren't sure of our materials when we first got there, so Tom and Lou got started on some debris pick up on one of their old sheds on the property.  Once we got an idea of what kind of roof we were going to build we got started--and by we I mean them--the most help I was today was handing people nails or just staying out of the way :).  They managed to get a nice frame up on the shed and then called it quits after about 5 hours due to the heat. 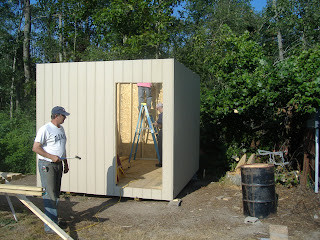 What we started with 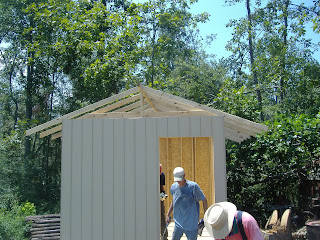 The new frame!
We also drove through some pretty devastated areas and I was able to get a few pictures of what it looks like, close to 4 months later: 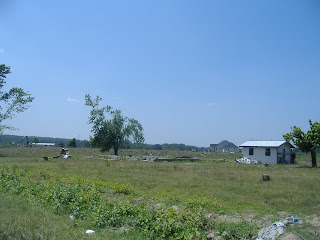 The foundation of a house to the left of the white house. 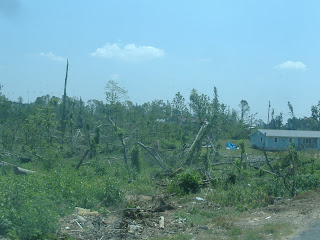 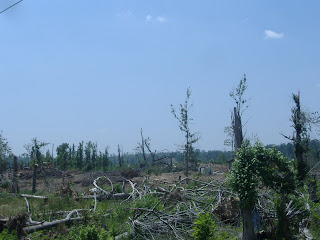 More mangled trees.
﻿
One of things we have talked about more than once as a group is how after the news leaves any area of devastation (natural disaster, fires, etc.) people tend to forget about who's left.  People in Alabama are still rebuilding their lives and will have to continue to do so for years to come.  Hopefully we can be a ray of hope for those left to know they are not forgotten.
"We must accept finite disappointment, but never lose infinite hope" -Martin Luther King, Jr.
<3 Megan
Posted by Foothills Convocation Tornado Relief at 1:44 PM 1 comment:

Day Two: We Conquered the Tree!

Day two was also a success, but I didn't want to be redundant with my titles. :)

We went back to the same house outside of Rainsville (the town we were in is actually Fyffe) to finish off the tree.  When we first got there, Tom did a small job ontop of the house getting rid of some of the remnants of the chimney that were left on the roof.  Only took a small amount of time--but still a huge help to our friend I'm sure! 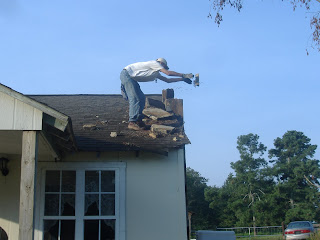 The next step was to finish tackling the tree we had been fighting the day before--and after 5 1/2 long hours of chainsawing, pulling, tossing, and carrying, we defeated it!! Unfortunately we couldn't get rid of the large stump that was left, but atleast the risk of more branches falling over onto the house is now gone. 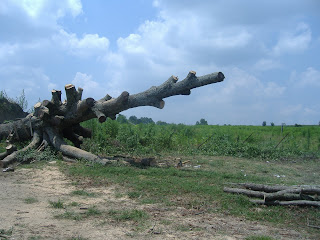 We also got to talk to the family a bit more about the actual event itself.  The homeowner described how he saw the tornado coming from the left side of his property and had his family take shelter in 2 different closets (his 2 daughters and his wife in one, and his son and mother-in-law in another) while he literally watched his house get torn in half.  The tornado was able to pull down a tree on one side of his house and land on his kitchen area, which is currently still in repair, mere feet from his son and mother-in-law.  He said he remembered telling his family that it was all ok and the tornado was gone, and just then he heard the tree on the other side of the house (the one we were working on) fall near to where his girls and wife were taking shelter.  All in all, everyone was ok (physically) in the end, but the damage was unimaginable.  And not just the damage to the house--it is damage to his time.  He trains horses for a living, but is so busy trying to fix his house, fences, and trees, that he obviously can't keep up with all of his land and livestock.  All we can hope is that we are not the last group to come help him and his family, who were literally less than 20 feet from death.

"I can do all things, through Christ who strengthens me" -Phil 4:13 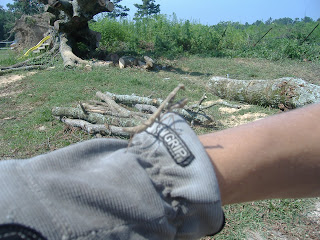 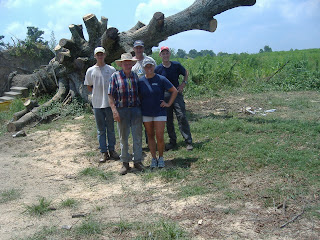 The trip actually began last night after arriving at our home for the week: St. Philip's Episcopal Church of Fort Payne, Alabama.  Their rector was more than welcoming and gave us instructions on how to use the various appliances (which we probably won't need since we have more pre-made food than we know what to do with--thanks guys!). We all hit the hay pretty early last night in our various rooms in the church and slept really well (yeah right :) ). 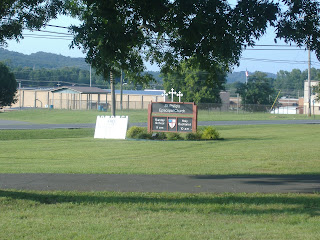 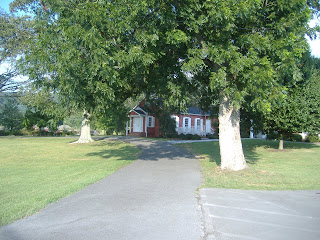 This morning we got off to an early start (5:30 am...aren't you proud mom and dad?) and hit the road to find out what our assignment for the day was going to be.  We met up with our local contact, Woody, and he sent us to a house in Rainsville.  The homeowner was attempting to rebuild part of his house and had trees uprooted.  Once we arrived we starting chainsawing (no I did not have a power tool in my hands) the tree and getting to know the family.  The youngest girl was about 8 years old and was set on showing me and Tom her entire farm.  Their house is set on a good amount of acreage and they have dogs, cats (kittens!), turkeys (what's the word for baby turkey?), pigs, horses, chickens and some longhorns.  After she and I were successfully chased (or so we thought) by one of the roosters, it was back to work on the tree.  We worked until about 1 pm and decided to call it quits based on the heat and our energy levels.  The homeowner was more than grateful for the work that had been done and we were more than happy to help him.  We plan to work with him for the rest of the week with his rebuilding and will continue to work on the trees and debris. 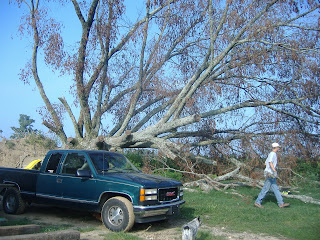 The tree we started with... 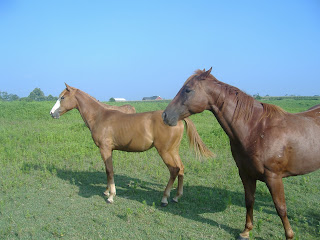 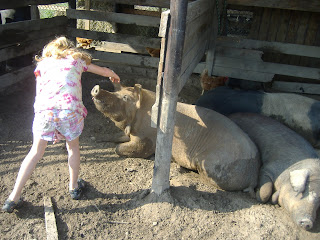 This picture doesn't do the pigs justice...they were huge!! 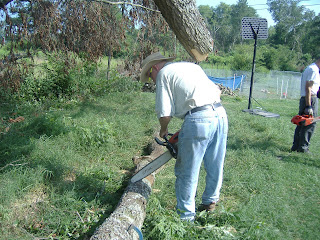 Ken being a manly man and cutting up the tree 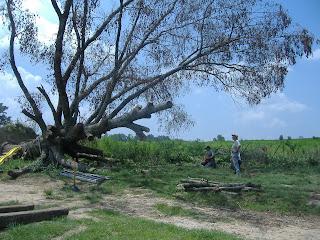 The tree we ended with! 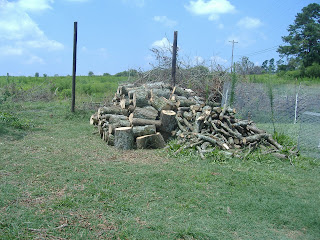